A colleague at the UN’s Food and Agriculture Organization (FAO) tells a terrifying story about the desert locust.

In 2005 she visited farmers in Niger as they prepared to harvest their crops. Just hours later, a swarm of locusts swept through the area and destroyed everything. One month later, truckloads of families were forced to leave their homes because they had nothing to eat.

A year before that the UN had launched an appeal for$9m(£6.9m) to help Niger and neighbouring countries control the locusts. The response was slow, and six months later the amount required in the appeal had reached $100m. The maths was simple: the locusts were faster than the international response.

History is now in danger of repeating itself. But on a much bigger scale.

The worst outbreak of desert locusts in decades is currently underway in the Horn of Africa. It is the biggest of its kind in 25 years forEthiopiaand Somalia – and the worst Kenya has seen for 70 years. The impacts of the outbreak in these countries are particularly acute as pastures and crops are being wiped out in communities that were already facing food shortages.

As we write, the swarms have justcrossed into Uganda and Tanzania, and moved within 50km (31 miles) of South Sudan. Djibouti and Eritrea are also affected. And Oman, Saudi Arabia, Sudan, Yemen, and Pakistan are fighting their own serious infestations.

The desert locust is considered the world’s most destructive migratory pest. A single locust can travel 150km and eat its own weight in food – about two grams – each day. A swarm the size of New York City can consume the same amount of food in one day as the total population of New York, New Jersey and Pennsylvania.

What we are seeing in EastAfricatoday is unlike anything we’ve seen in a very long time. Its destructive potential is enormous, and it’s taking place in a region where farmers need every gram of food to feed themselves and their families. Most of the countries hardest hit are those where millions of people are already vulnerable or in serious humanitarian need, as they endure the impact of violence, drought, and floods. 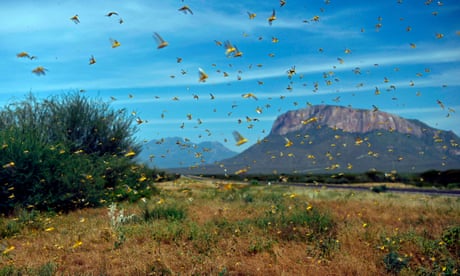 We have acted quickly to respond to this upsurge. Local and national governments in East Africa are leading the response, and our respective offices are working closely together to keep this outbreak under control. The UN’s Office for the Coordination of Humanitarian Affairs has released $10 million from its Central Emergency Relief Fund to fund a huge scale-up in aerial operations to manage the outbreak.

The FAO is urgently seeking $76 million from donors and other organisations to help the affected countries fight the outbreak. The amount required is likely to increase as the locusts spread.

But the window to contain this crisis is closing fast. We only have until the beginning of March to bring this infestation under control as that is when the rain and planting season begins. The swarms are highly mobile; the terrain often difficult; the logistical challenges immense. But left unchecked – and with expected additional rains – locust numbers in East Africa could increase 500 times by June.

We must act now to avoid a full-blown catastrophe. And we will. At the same time, we need to pay attention to a bigger picture. This is not the first time the Greater Horn of Africa has seen locust upsurges approach this scale, but the current situation is the largest in decades. This is linked to climate change. Warmer seas mean more cyclones, generating the perfect breeding conditions for locusts.

Together, we express deep solidarity with the people and communities affected. And we call on the international community to respond with speed and generosity to control the infestation while we still have the chance.

•Qu Dongyu is director-general of the UN Food and Agriculture Organization; Mark Lowcock is the UN under-secretary-general for Humanitarian Affairs and Emergency Relief Coordinator.

We’ve got an announcement…

… on our progress as an organisation. In service of the escalating climate emergency, we have made an important decision –to renounce fossil fuel advertising, becoming the first major global news organisation to institute an outright ban on taking money from companies that extract fossil fuels.

In October we outlined our pledge: that the Guardian will give global heating, wildlife extinction and pollution the urgent attention and prominence they demand. This resonated with so many readers around the world. We promise to update you on the steps we take to hold ourselves accountable at this defining point in our lifetimes. With climate misinformation rife, and never more dangerous than now, the Guardian’s accurate, authoritative reporting is vital – and we will not stay quiet.

We chose a different approach: to keep Guardian journalism open for all. We don’t have a paywall because we believe everyone deserves access to factual information, regardless of where they live or what they can afford to pay.

Our editorial independence means we are free to investigate and challenge inaction by those in power. We will inform our readers about threats to the environment based on scientific facts, not driven by commercial or political interests. And we have made several important changes to our style guide to ensure the language we use accurately reflects the environmental emergency.

The Guardian believes that the problems we face on the climate crisis are systemic and that fundamental societal change is needed. We will keep reporting on the efforts of individuals and communities around the world who are fearlessly taking a stand for future generations and the preservation of human life on earth. We want their stories to inspire hope.

We hope you will consider supporting us today. We need your support to keep delivering quality journalism that’s open and independent. Every reader contribution, however big or small, is so valuable.Support the Guardian from as little as £1 – and it only takes a minute. Thank you.

A 'miracle worker', a mall cop and broken promises in The Gambia