Kenya banned FGM in 2011, but Europeans still bring their daughters to underground clinics there to be cut.

Nairobi, Kenya –In a “good month”, about 100 girls will be brought by their families to Halima Hirsi’s* underground clinic in Nairobi to be subjected to female genital mutilation (FGM).

Families come here from all over the world, willing to pay $150 a time for their daughters to be cut.

“The Somali diaspora are good people for my business,” says Hirsi, 69, the manager of the clinic, who also carries out procedures.

The clinic is located in the Eastleigh district of Nairobi, which is known locally as “little Mogadishu”. Itmostly receives Somali clients from Europe – particularly the United Kingdom, Sweden and Norway – and the United States.

Hirsi works with Abdilatif Ali*, a broker or “middle man” who acts as a gateway to the clinic.

“People pay me to identify a clinic to help their young girls,” he explains. “Business is good; sometimes we can attend to over 30 clients a week.”

The parents travel thousands of miles, paying large sums of money, to ensure that their daughters undergo a procedure that can range from losing the tip of the clitoris to having the entire inner and outer labia sliced off and the opening to thevagina sewn up.

While most clients at Hirsi’s clinic opt for the former, it does cater to the latter.

When Amina Duba, now 29 and a mother of five, underwent FGM as a teenager, she was told by her aunties that the rite was going to make her a “complete woman”.

When she was cut, Amina’s vaginal opening was also completely sewn closed.This caused terrible complications when she gave birth to her children, and makes even her monthly period difficult and painful.

In short, Duba says, the lingering pain is a nightmare, and she has no money for treatment to help alleviate the agony.

Sitting on a thick mattress in the sitting room of her two-room house in the Gitathura slum in Nairobi’s Korogocho district, with her 13-year-old daughter by her side, she explains how badly the procedure has affected her life.

“It was bad and I regret it but I could do nothing because it is the parents who decide,” she says. “They removed the labia minora and majora. It is like butchering a human.”

“I would never allow my daughters to go through this … and that is why they will never be circumcised. It is all a myth about a circumcised girl being more desirable for marriage.” 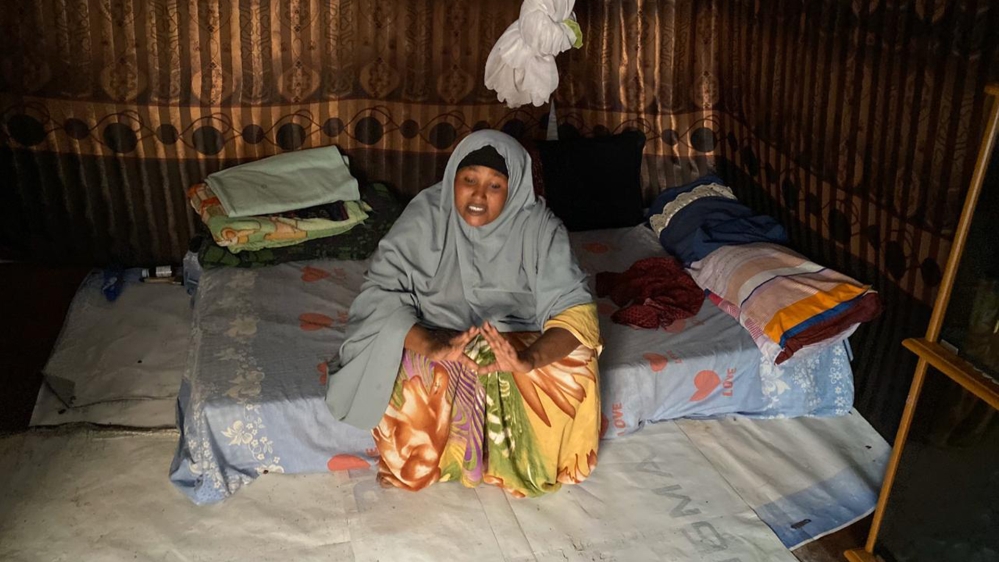 FGM is illegal in Kenya; it has been since both the practice and procurement of it werebannedin 2011.

Theoretically, practitioners and brokers can be jailed and fined. The minimum punishment is three years imprisonment and a $2,000 fine. But there are no official statistics on the number of people who have been prosecuted, and judges can be reluctant to punish offenders who are often parents responsible for the care of their children.

Rates of FGMvarywidely across the country.Only0.4 percent of Luhya girls and 0.2 percent of Luo girls– both ethnic groups in western Kenya – are subjected to the practice. But insome eastern and northeastern counties of Kenya such as Mander and Wajir, the number rises to 90 percent.

Overall, about 21 percent of women and girls still suffer FGM in Kenya, according to the non-government organisation (NGO), 28toomany. The highest prevalence (97 percent) is in northeastern Kenya, where Amina Duba originally came from, and some parts of western Kenya – in Kisii county, it is nearly universal and girls go through the rite between the ages of five and seven. It is more prevalent in rural communities where 26 percent of women and girls undergo FGM than in cities, where prevalence is nearly 14 percent.

Instead of ending the practice, some critics say Kenya’s law against it hasdrivenitunderground.

Circumcisers from Duba’s Borana community in the Gitathura slum have started to move to other parts of Kenya where there is more acceptance of FGM.

Ibrahim Guyo, a coordinator at the NGO, SASA, which promotes awareness about issues such as FGM and women’s reproductive health, says: “FGM is secretly performed by community elders and nurses in people’s homes but the business is undergoing a slump in Nairobi because of the ban, but not in other parts of the country.“

Clients continue to come to Halima Hirsi’s clinic in Nairobi from overseas, however. And, while the traditional, female elders who perform FGM have started to move on, local demand for clinical procedures also remains strong in cities like Nairobi.

Most of the procedures she performs involve removing the tip of the clitoris – something she says takes a few minutes to do and requires about two weeks of recovery time. The more extreme procedure that involves removing all the flesh of the labia minora and majora and leaving only the entrance to the vagina can take an hour or longer, with girls needing at least 40 days of recovery time, she says.

The resulting pain and complications can last much longer than the 14 to 40 days, however.

Most girls brought to the clinic stay with relatives. But for an additional $150 to $200 they can stay in a house where Hirsi says they are looked after and “well-fed”.

“When they heal they are now considered ready for marriage,” she adds. 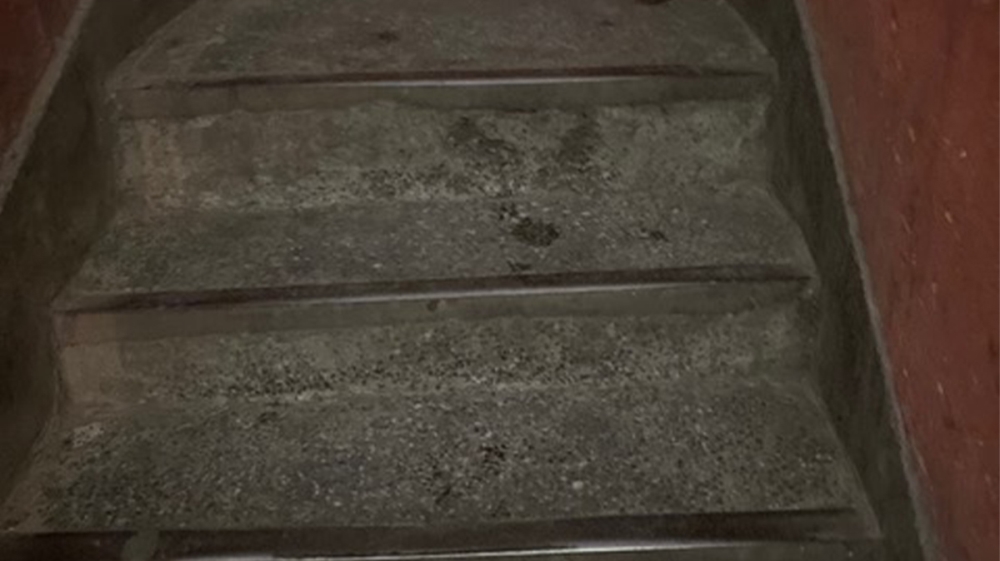 The steps up to the FGM clinic in Eastleigh, Nairobi [Abdullahi Mire/Al Jazeera]

‘I will pay anything’

Hirsi’s clinic is hidden in the midst of a maze of narrow, dark streets that lead into a slum in Eastleigh’s Section 3 area. Abdilatif, the broker, talks to us in low tones as we enter a dark room.

On the day that we visit the clinic, five women sit on a wooden bench in a room curtained by a red cloth. Halima Hawo*, 64, one of the clients who has brought her five-year-old granddaughter from Sweden, says: “My granddaughter is getting older. I need her to … [have undergone FGM] before she goes back home.”

She explains that when her granddaughter is older and marries a Somali man in Sweden, she will be expected to have undergone the procedure.

Before she heard of this clinic, she says she recently arranged for three ofher nieces who live in Colorado in the US to travel to Garissa in northeastern Kenya for FGM. There, she says, they performthe “correct” – the most extreme – version of FGM. The girls are kept in isolation in a house for 40 days, she explains, with their legs restricted by a rope to prevent movement.

Fartun Khadija*, 39, has brought her five-year-old daughter to the clinic from the UK. She sits fidgeting on her mother’s lap.“I will pay anything,” she says.

The locals who use the clinic pay between $2 and $8 – much less than the foreigners.

Among the mainly Somali communities around Eastleigh, circumcised girls are seen as “clean” and a woman with a clitoris is viewed as a “liability” – she is thought likely to be unfaithful to her husband.

At a coffee shop in downtown Nairobi, a Somali elder, 70-year-old Hussein Farah, says: “Who will ever marry unclean girls in our community? FGM is protection against sex before marriage.” He describes himself as a “very bold man who likes to speak the truth”.

Amina Ahmed, 69, is a circumciser who has been practising since the 1980s in different countries including Somalia, Ethiopia and, now, Kenya. She works at Hirsi’s clinic and performs FGM procedures alone, without assistance. She also works as a midwife in the local community.

She acknowledges that there can be lifelong complications caused by FGM but says she takes “precautions” to prevent this, although she does not expand on what those precautions are. She does say that wealthier clients at the clinic can buy pain relief medicine which costs between $40 and $50.

“Last week I served two girls – one from Canada and another from Sweden, but many are local. I do at least five clients a week,” she says.

‘These days our girls don’t want it’

But, while practitioners like Ahmed claim business is still booming, more and more women are choosing not to force their daughters down this path.

“These days our girls don’t want it,” Duba says. She adds that her peers – other parents her age – feel the same way. She has not heard about FGM being performed in her Korogocho community for nearly 10 years.

She hopes the practice will eventually die out altogether as people become better educated about the dangers of FGM.

“We have been sensitised [to this issue] by the TV and also by activists. It is not the government which made us stop this ritual. We saw it was not good because of the scars and pain it has left in our lives,” Duba says.

“It’s not about religion but culture,” she adds. “But the generational attitudes are changing and women and young girls are more empowered by information. These days our girls don’t want it and we support them.”

*Some names have been changed for anonymity

Re-Advertisement - Emergency Specialist, NO-3, FT, Khartoum, Sudan (OPEN for Nationals of Sudan ONLY)

Re-Advertisement - Emergency Specialist, NO-3, FT, Khartoum, Sudan (OPEN for Nationals of Sudan ONLY)