Since start of coronavirus lockdown, at least five women have been killed at the hands of their abusers, activists say.

Banging pots and pans and waving homemade banners, scores of Palestinians have expressed their solidarity with women enduring various forms of domestic violence during a lockdown imposed due to the coronavirus pandemic.

The initiative on Monday, which saw both women and men stand at their windows and balconies across the occupied Palestinian territories and historic Palestine, was aimed at shedding light on the plight of women who are locked down with their abusers.

According to a tally combined by Tal’at, an independent political feminist movement that organised the campaign, 11 Palestinian women have been killed as a result of domestic violence so far this year, with five of the fatalities occurring since the implementation of the lockdown in early March. Of these five, four succumbed to gun wounds.

Tal’at activist Soheir Asaad said that whilefor many “quarantine” suggests being safe at home, for others it is “hell”.

“It means living with someone who could end your life,” Assad told Al Jazeera from Haifa, describing the reality faced by some women during the lockdown. 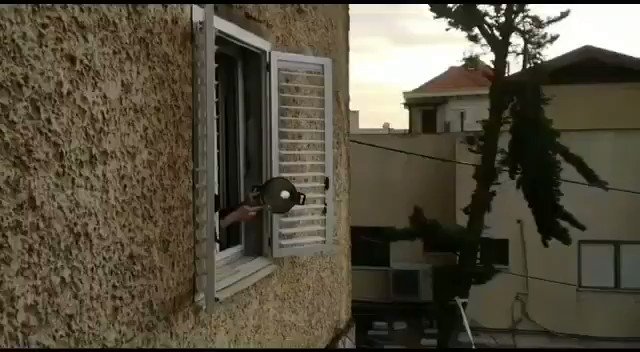 Assiwar, a women’s support NGO, says the number of calls it has received in recent weeks has risen by 30 percent, notwithstanding a plethora of messages landing on its social media platforms. Other groups report similar increases, with the Palestinian Working Women Society for Development (PWWSD) saying its counseling hotline received 924 calls between March 22 and April 15.

Lamia Naamneh, head of Assiwar and a women’s rights defender for more than 20 years, said most appeals for help involve women who have received death threats.

“Just yesterday, a call led us to a woman who was only able to speak to us via Facebook Messenger chat while at home,” Naamneh told Al Jazeera on Monday.

“She said she was threatened, beaten, and we had to send the police to get her transferred to a safe house,” she said.

Naamneh added there has also been a surge in cases of both sexual violence anddomestic abuse against children following the implementation of the lockdown measures. 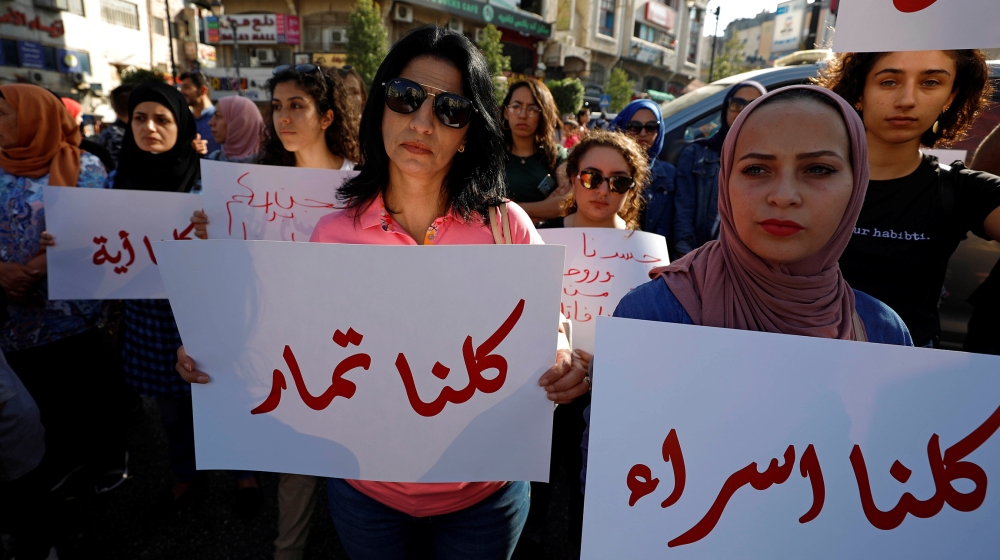 At the same time, there are major concerns that many cases of domestic violence go unreported.

“Fear is the biggest barrier faced by abused women … Fear of being ostracised, excluded, abandoned, of not being a good mother or daughter,” said Amany Khalifa, a social worker who also participated in Monday’s campaign.

The situation becomes even more difficult when authorities do not work to protect women, she told Al Jazeera from occupied East Jerusalem.

“We cannot ask an inherently violent institution to change the reality of Palestinian women.”

It is common for cases to be under-reported in certain areas of the West Bank, such as in Area C – which is under full Israeli military control. This is because it is difficult for the police to reach homes in these areas, according to PWWSD coordinator Futna Khalifa, who notes there are checkpoints hindering the movement of Palestinians.

“Many Palestinian families live in small apartment complexes, and the small spaces can increase the chances of friction and conflict between a husband and wife,” Khalifa said.

“This is especially true for those women who already faced abuse prior to the lockdown. What may have been psychological abuse, may have turned into a physical form of abuse during this time.”

While many women across the world share similar realities, abuse is especially complex and systematic for Palestinian women, Tal’at’s Asaad said. Palestinian women live in “fragmentation” and endure the various consequences of the Israeli occupation, she added.

“This is a unique reality that Palestinian women in particular live under,” Assad noted.

Tal’at, which translates to “rising up”, emerged in September last year following themurder of 21-year-old Israa Gharibin the occupied West Bank. It seeks to create a discourse where violence against Palestinian women is talked about within the context of “Palestinian political and national liberation”.

“We understand violence as social, economic and political injustice against women – not only as domestic violence,” Assad said. “These aspects have affected the way we experience violence and our ability to resist it and even talk about it.”

Alongside the strict measures in place due to the pandemic, the situation is compounded by the pressures of Israeli occupation,economic subjugation and political apathy, activists say.

“This is why we wanted to create a space for Palestinian women to be part of our movement,” Assad said of Monday’s initiative. “If we can’t be on the street … we are all in our homes and we will not be silenced”.

Khalifa agreed.“It’s very important for a voice to appear in the public sphere, to disrupt it, because life cannot continue while there is this huge presence of violence against our women.”

She added: “We have to realise that colonial violence and patriarchal violence are connected.”

‘Home not a safe space’

There are only two safe houses designated for Palestinian women in Israel, which results in a constant lack of space to accommodate newcomers.

What further complicates the situation these days is that NGOs such Assiwar have first to ensure that the new arrivals are not carriers of the coronavirus. Often, these women are required to reside in hotels for 14 days at their own expense, a luxury most cannot afford.

“We’re fortunate that friends who support our work have agreed on several occasions to take these women in,” Naamneh said, adding that some women “end up on the streets” after not being admitted to safe houses.

Meanwhile, many Palestinians who work in the Israeli service sector have lost their jobs in the past few weeks, which has worsened an already dire economic situation.

While being confined to their homes, many tend to take out their frustration on vulnerable women who are left without refuge during the lockdown, Khalifa said.

“Violence is often practiced when the abuser is frustrated, which is manifested in the form of abuse,” she said. “This is why homes are not a safe space for many women.”

Making things worse is the fact that the Israeli police do not pay attention to Palestinian communities, Naamneh said.

“When the occupation doesn’t prioritise our safety, it is easy to kill when you’re in an unsafeenvironment.”

Timeline: How the new coronavirus spread

Timeline: How the new coronavirus spread