Fears over most vulnerable Palestinian prisoners amid coronavirus

Detainees commission says there are 700 Palestinians currently held in Israeli prisons who are sick.

Noureddine Sarsour was not surprised when his test for COVID-19 came back positive. He received the news a day after his release from an Israeli prison on March 31.

During his two-week detention at Israel’s Ofer prison in the occupied West Bank – on charges of throwing stones and firebombs at Israeli forces – the 19-year-old said he underwent two blood tests and a throat swab. A day later, the charges against him were dropped and he was released, although he was not informed of the test results.

“Usually, before the prisoner is released from Israeli prisons, he should meet the prison manager,” Sarsour, who in 2017 has previously been detained and released without charge, told Al Jazeera from isolation in a hotel in Ramallah.

“When I went to see him, the manager was wearing an anti-static uniform with a face mask and spoke to me while standing about three metres away. At that moment, I felt there was something wrong,” he said.

Sarsour’s suspicion that he had been infected with the new coronavirus increased when the guards who escorted him to the car as he was leaving kept their distance.

“I myself opened the car door and closed it behind. They didn’t approach me until I was dropped near a checkpoint,” he said.

Upon his arrival at the checkpoint, he was transferred by Palestinian medical crews to a Ramallah hospital and tested for coronavirus. The test returned positive the next day, and in the following days, he began showing mild symptoms, including a headache, fever and throat pain.

“My big fear is about the prisoners in Ofer prison. I mixed with about 30 to 70 prisoners while staying in Ofer prison, as the Israeli prison service keeps moving new prisoners between sections.”

He said the authorities did not take special precautions to prevent infection inside the prison, such as enforcing social distancing. According to Sarsour, the prisoners asked the Israeli prison service multiple times to place new prisoners in a 14-day quarantine, before allowing them to mix with other prisoners.

In the days after his release, some of the inmates at Ofer held a demonstration to call for testing for the inmates who had been in contact with Sarsour. The Palestinian Prisoners’ Society said about nine prisoners who were known to have mixed with Sarsour were placed in quarantine.

The Israeli Prison Service (IPS) said in a statement on April 2 that “every new detainee” was held separately for 14 days before being absorbed into a regular part of the prison.

Thaer Shretieh, head of the media unit for the Commission of Detainees and Ex-detainees’ Affairs, told Al Jazeera the commission sent a letter to the IPS calling for an investigation into Sarsour’s case. The letter also called on the prison service to implement preventive measures, especially with prisoners who had been in recent contact with Sarsour, he added.

“The Israeli side totally denied that the prisoner was infected inside their prisons. Despite that, Israel has confirmed that three guards at Ofer prison and al-Ramleh prison tested positive for coronavirus,” Shretieh said.

The IPS said on March 31 that prison guards at Ofer who had tested positive for COVID-19 were placed into isolation and investigations showed they had not been in direct contact with prisoners.

As of April 16, Israel has reported more than 12,000 cases of coronavirus infections and 143 deaths linked to it. The Palestinian Authority has confirmed a total of 295 cases across the West Bank and Gaza, of whom two people have died.

The detainees’ commission has called on the Red Cross and the WHO to intervene to release prisoners who may be more susceptible to the coronavirus. According to the commission, there are 5,000 Palestinians currently held in Israeli prisons, including 700 who are sick.

On April 17, Palestinians mark Prisoners’ Day to remind the public of the plight of those thousands of Palestinians imprisoned in Israeli military jails.

Yehia Masawdeh, spokesman for the International Committee of the Red Cross in Jerusalem and the West Bank, told Al Jazeera that “non-public meetings” are carried out weekly with the Israeli authorities to discuss the conditions of prisons. “We made sure that the infected Israeli guards were put in quarantine,” he said.

“We urge the Israeli authorities to commit to the prevention and sterilisation standards, in accordance with international humanitarian law,” he added.

Masawdeh said the ICRC has stopped family visits, as well as visits by lawyers and ICRC delegates to prisons, and is holding weekly meetings with Israeli authorities to inspect prison conditions through visits by an international doctor.

“We have received many demands for the release of prisoners, and the ICRC, in turn, has demanded the Israeli authorities to release prisoners over the age of 65 in addition to those suffering from chronic diseases.”

On April 16 the IPS announced it had begun a programme of coronavirus testing for prisoners and staff.

“The testing process began on April 14 and will initially be conducted by 100 prisoners and staff serving in the IPS Medical Center (ROSH),” the statement said.

“Further, and according to the rate of issuance of test kits from the Ministry of Health, the sample testing procedure will continue for the entire IPS population”, it said.

‘My son is dying slowly’

For the relatives of the most vulnerable Palestinian prisoners currently held in Israeli jails, the outbreak has been agonising. Sabbah al-Jerjawi’s son Iyad is currently serving a 9-year sentence for multiple charges in Gilboa Prison in northern Israel. Iyad is 34 years old and was diagnosed with a cancerous brain tumour two months ago. 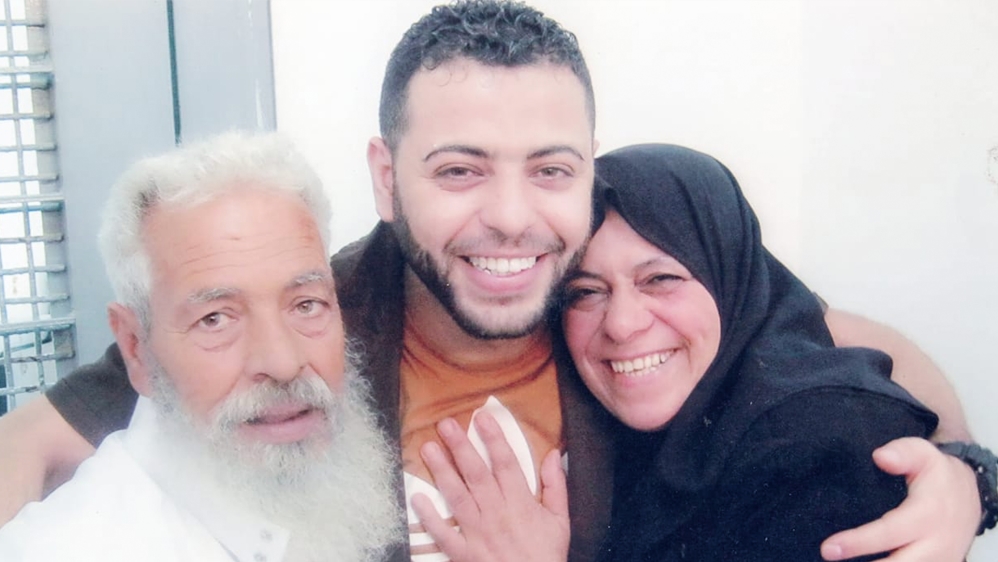 Iyad’s parents have called for his release [Al Jazeera]

Iyad, originally from Khan Younis in the southern Gaza Strip, was detained in June 2011 at the Israeli-controlled Erez crossing, on his way back from receiving medical treatment in Israel.

“My life has turned upside down two months ago, after the medical check-ups of my son, Iyad, showed that he suffers from a brain cancer,” 58-year old Sabbah said. “Since then, we called all bodies and the Red Cross to intervene to release my son and to let him receive the proper treatment outside the prison, but in vain. My son is dying slowly in prison.”

“Since the outbreak of coronavirus, we’re not sleeping due to our anxiety and fear. The conditions of prisoners in Israeli prisons are very deteriorated. They don’t have the immunity to confront this pandemic that spreads across the world,” she added.

“Only 60 days are remaining for the release of my son, but my joy turned into horror, because every day that passes without intervention increases the risk of a coronavirus outbreak inside Israeli prisons.”