Latin America women, minorities ‘to suffer most’ by COVID-19

The coronavirus pandemic will make a bad economic situation worse for women, Indigenous groups, migrants and people of African descent in Latin America, a region already plagued by deep-rooted inequality, a United Nations agency said in a report issued on Tuesday.

Unequal access to potable water, sanitation, healthcare and housing could also mean higher rates of infection and death among these higher-risk populations, the Economic Commission for Latin America and the Caribbean (ECLAC) said in the report.

Women are in a “particularly vulnerable situation”, the report said, because their work is more often informal, with few guarantees, leaving them more exposed to the risk of unemployment.

Domestic workers in Latin America, who account for 11.4 percent of employed women in the region, will be especially hard hit by the virus and economic downturn, with limited access to an already tenuous social safety net in many countries.

Many domestic workers are migrants, or of Indigenous or African descent, compounding the discrimination, the agency said.

Women are also most likely to be saddled with the responsibilities that come with quarantine and the closure of schools, increasing stress at home and the potential for domestic violence.

“The burden of unpaid domestic work assumed by women, adolescents and girls, as well as cases of violence against them, are significantly increased,” the agency warned. 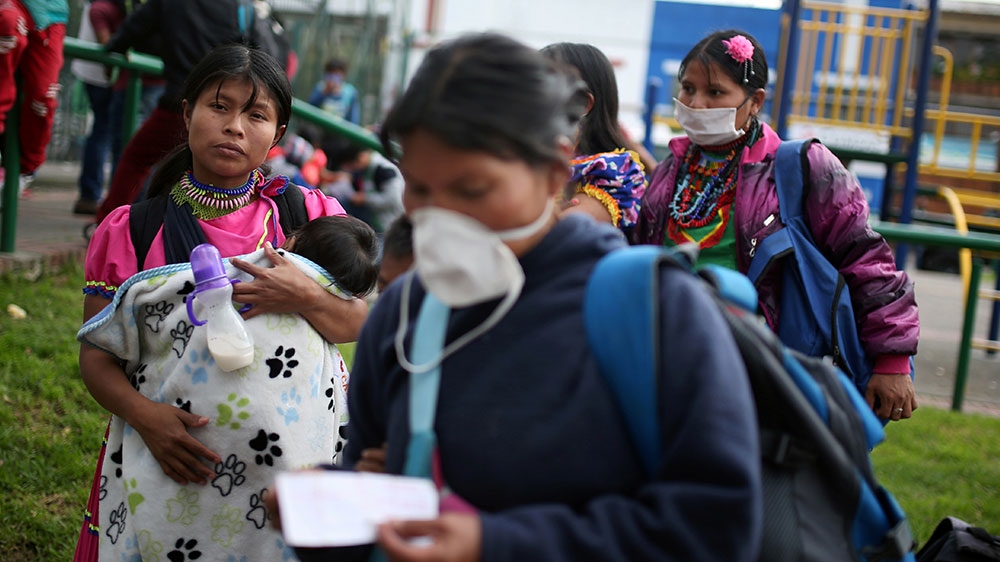 Indigenous people wearing protective face masks as a preventive measure against the spread of the coronavirus disease (COVID-19) carry their belongings after being evicted from a building in Bogota, Colombia [Luisa Gonzalez/Reuters]

Although the UN report focused partly on women, data from around the world has shown that men are dying at a higher rate than women from COVID-19, the respiratory disease caused by the novel coronavirus.

Latin America has more than 369,000 confirmed cases of the new coronavirus and more than 20,000 deaths from COVID-19, according to a Reuters News Agency count based on official data.

The region’s economies are set to contract by a record 5.3 percent in 2020, unleashing the worst social and economic crisis in decades, the agency said in a prior report in April.

The crisis is expected to exacerbate festering social and labour discrimination suffered by the Indigenous and Afro-Latino populations, who already face greater wage gaps compared with other groups, ECLAC said.

“Likewise, discrimination and racism hinder the effective access of indigenous and Afro-descendant people to health services,” the report said.

Babies among 16 killed as gunmen attack maternity ward in Kabul