The UN says locusts in Ethiopia have damaged 200,000 hectares of cropland, as region braces for new swarms.

Some one million people in Ethiopia require emergency food aid after swarms of desert locusts damaged 200,000 hectares (half a million acres) of cropland in a region already struggling with food security, the United Nations has said.

The announcement on Monday from the UN Food and Agriculture Organization (FAO), which recently concluded a joint assessment with the Ethiopian government, came as parts of East Africa are bracing for new swarms that could be even more devastating

Billions of desert locusts, some in swarms the size of Moscow, have already chomped their way through much of the region, including Ethiopia, Somalia, Kenya, Djibouti, Eritrea, Tanzania, Sudan, South Sudan and Uganda.

Their breeding has been spurred by one of the wettest rainy seasons in the region in decades.

In Ethiopia, the locusts have caused widespread losses of sorghum, wheat and maize, also known as corn, and vastly reduced the amount of available land for cattle grazing, FAO said.

Of the one million individuals requiring emergency food assistance, some 75 percent live in the country’s Somali and Oromia regions.

About 8.5 million people in Ethiopia are already in severe acute food insecurity and in need of humanitarian assistance,according to the FAO. 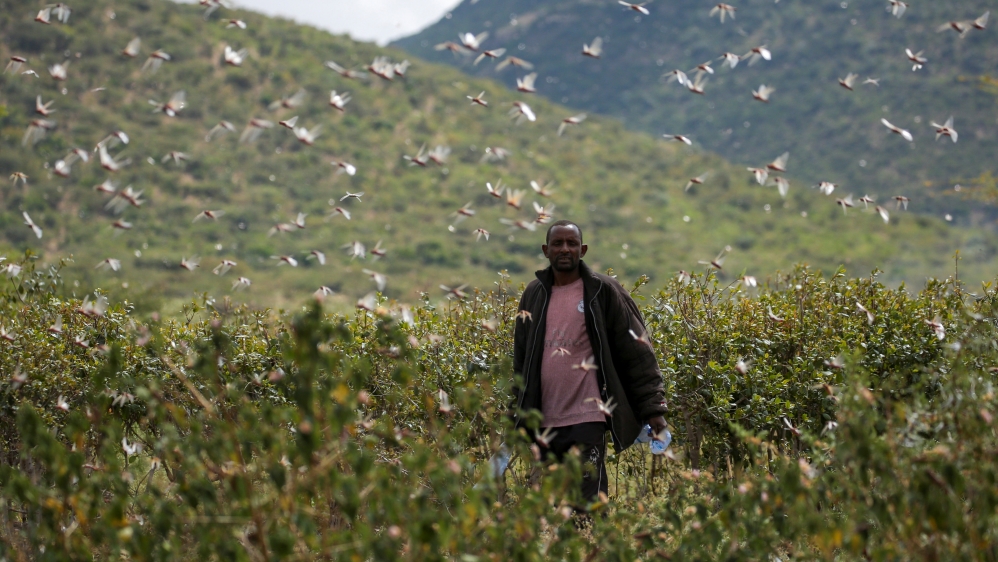 Ahmed Ibrahim, 30, an Ethiopian farmer, attempts to fend off desert locusts as they fly in his khat farm on the outskirts of Jijiga in the Somali region, Ethiopia [File: Giulia Paravicini/Reuters]

In the six East African countries worst affected or at risk of locusts – Ethiopia, Kenya, Somalia, South Sudan, Uganda and Tanzania – some 20 million people are already experiencing acute food insecurity, according to FAO.

Fatouma Seid, FAO Ethiopia representative, said farmers and pastoralists in the country, needed help in the form of agricultural inputs and cash transfers to get them through the emergency, which was being worsened by the coronavirus pandemic.

“It is critical to protect the livelihoods of the affected population especially now that the situation is compounded by the COVID-19 crisis,” Seid said, referring to the disease caused by the new coronavirus.

Ethiopia, Africa’s second-most populous country with 110 million people, has recorded just 74 cases of COVID-19 including three deaths. Testing, however, has been limited and experts fear the country’s weak health system, like others in the region, could be quickly overwhelmed by an influx of cases.

The pandemic is also having a crippling economic effect in many countries, destroying jobs, dislocating trade systems and crimping supply lines through lockdowns and movement restrictions.

The locust situation, meanwhile, is likely to worsen.

Last week, FAO warned a “massive increase” in locusts across the region would pose “an unprecedented threat to food security and livelihoods” by imperilling the upcoming planting and harvest seasons.

At the same time, coronavirus-linked flight restrictionshave hampered effortsto wipe out the swarms by causing delays in the delivery of pesticides.

“The biggest challenge we are facing at the moment is the supply of pesticides and we have delays because global air freight has been reduced significantly,” Cyril Ferrand, FAO’s Resilience Team Leader for East Africa, said last week.

“Our absolute priority is to prevent a breakdown in pesticide stocks in each country. That would be dramatic for rural populations whose livelihoods and food security depend on the success of our control campaign.”

Coronavirus: Why are Africans in China being targeted?