Haiti: Dozens of people hit by stray bullets as fierce violence flares up again in Port-au-Prince 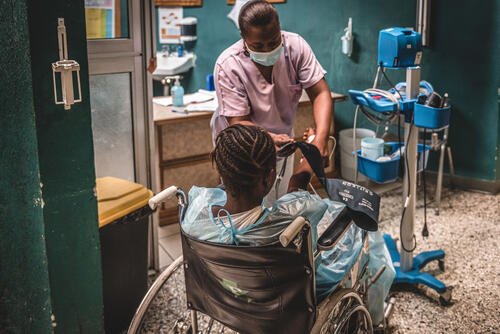 Since last weekend, Médecins Sans Frontières (MSF) has seen a significant increase in the number patients wounded by stray bullets in our medical facilities in the capital of Haiti. Since the start of violent clashes between armed groups, MSF’s emergency centre in Turgeau has seen almost 80 people with gunshot wounds, most of them by stray bullets.

“These patients only represent a small number of the victims. Moving around has become extremely dangerous in several areas of the city,” says Rachelle Seguin, MSF medical coordinator in Haiti.

“Many inhabitants are trapped in their neighbourhoods. This has made access to healthcare very difficult. We are organising mobile clinics to reach the people who can’t move. But even our medical teams face difficulties. At least three times our mobile clinics had to be postponed or cancelled because of the fighting,” says Seguin.

During a ceasefire in the neighbourhood of Cité Soleil our teams carried out 150 medical consultations in just a few hours – 30 of which were for people with infected wounds. Infections are often caused by a lack of treatment. This is likely because the wounded couldn’t get medical help after being injured, either because of the ongoing fighting or because armed groups have erected roadblocks and barricades.

In some areas, our teams can only treat patients in basements or windowless rooms because of the dangers of crossfire and stray bullets.

Since the increase in violence in several areas of Port-au-Prince – whether in Cité Soleil, Martissant, Bel Air, Bas Delmas, or the fringes of the city centre – our teams have observed a decrease in outpatient consultations.

“One year after we had to close our emergency centre in Martissant because of the violence and move to Turgeau, we reiterate our calls. The people of Port-au-Prince must be spared from the violence and must have access to healthcare and basic services,” says Benoît Vasseur, MSF head of mission in Haiti. “We’re very concerned that the conflict zones in the Haitian capital and its surroundings are spreading.”