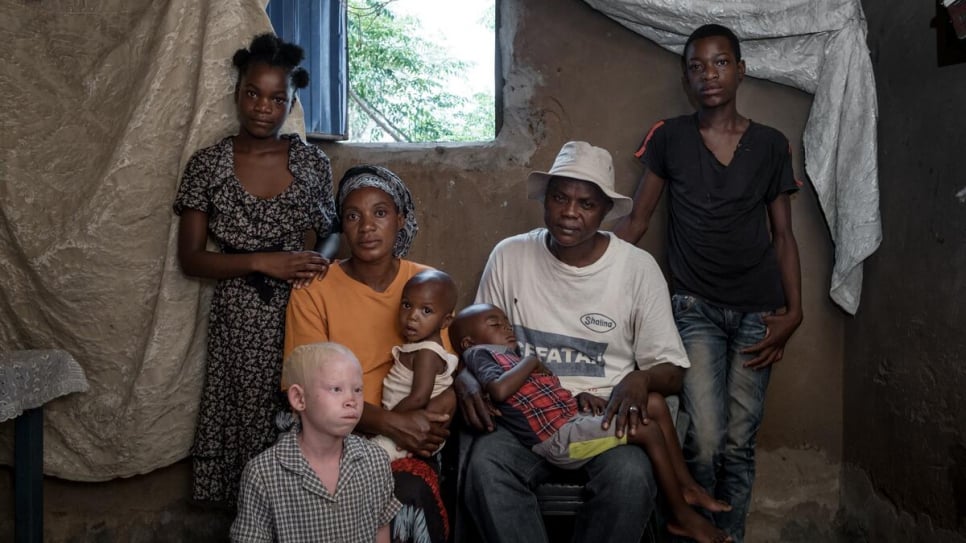 Mbuyi Kayembe is one of over 7,000 residents in the Osire settlement, located in arid scrubland over 200 kilometres from Namibia’s capital, Windhoek. He fled his home in the Democratic Republic of the Congo (DRC) in 1993 because of the conflict which claimed the lives of both his parents.

Mbuyi originally sought safety in Zambia, where he met his wife Mary, whose father had also been killed by rebels. When their daughter Sarah was born with albinism, their lives came under threat once again. His daughter was the target of witchcraft and Mbuyi was approached by a local army chief to buy her body parts for use in traditional medicine. Their safety in jeopardy, the family fled again, to Namibia.

At the settlement in Osire, land is set aside for refugees to grow fruit and vegetables, enabling Mbuyi to supplement the family’s food rations and providing a small income from selling the surplus crops.

“The food we are receiving doesn’t last us through the month.”

Today however, the once-fertile land has become inhospitable. Unseasonal weather and dwindling food rations caused by cuts to aid budgets are leaving Mbuyi’s family hungry for days at a time. With temperatures in Osire reaching nearly 40°C, and water in short supply, refugees are struggling to grow the crops that have until now been a vital source of food and income. Mbuyi is resourceful, but he now fears for the future of his five children.

“The food we are receiving doesn’t last us through the month,” he says, in the dark two-room dwelling with a single mattress where the family of seven take turns to sleep. “We haven’t received paraffin to cook with for several months. We have no choice but to look for firewood in the private farms surrounding the settlement. It is illegal but if we didn’t, we wouldn’t be able to cook our food. Our children would starve.”

“Sarah can’t go outside without getting sun burnt,” he adds. “By midday, it’s so hot outside and it pains me as a parent to see her struggle with this. I have to sell the few rations I receive to buy sunscreen lotion for her.”

Located 90 minutes from the nearest town, refugees in Osire are isolated from opportunities to integrate and reliant on humanitarian assistance.

Just as needs are increasing, aid in the region is under severe pressure due to the sharp increase in fuel and food costs. UN High Commissioner for Refugees Filippo Grandi recently warned that without an injection of US$700 million in additional funding before the end of the year, UNHCR will be forced to cut vital aid to forcibly displaced people across the world.

In Namibia, the impact of inflation has meant that the budget allocated by UNHCR to fund a year’s worth of food for refugees has lasted only eight months. Osire’s livelihoods project, supporting refugees in small-scale farming and animal-rearing so they can be more self-sufficient, was already cut in September.

Climate change is compounding these challenges. Low rainfall has resulted in a poor harvest: the two acres provided to refugees to farm should already be full of plump watermelons, but without water, the melons have split open before they are fully grown. Rows of onions and corn are withered and burnt. Half of the settlement’s boreholes have run dry.

“Here in the desert, if we don’t have food, we cannot survive,” says single mother Chantal Mwamarakiza, who was forced to flee Burundi when her husband was beaten to death. The refuge she has found in Namibia is now uncertain as the seasonal rains are yet to arrive and soaring temperatures are undermining her ability to support her family. “We are cultivating our gardens but the water has run dry so nothing will grow. I have to sell my rations of beans and maize for other kinds of food for the children and sometimes I don’t have money for them to go to school.”

Martin Byendimbwa, chairperson of the Refugee Community Committee of Namibia and an active advocate for his fellow refugees, echoes these concerns.

“The problem is inflation,” he says. “The price of a bag of maize meal, our staple food, keeps going up. I am grateful to the Government of Namibia for giving us this settlement but without the right to employment, we can’t support ourselves and we can’t make use of our education.”

“I’m crying for my children’s future.”

The head of UNHCR’s office in Namibia Bernadette Muteshi is concerned about the consequences of underfunding for refugees. “Our budget has plummeted, which is why we have to take tough decisions to cut services,” she explains. “We’re only giving basic rations which only last for three weeks of the month. We don’t have extra funds to give more support to those in need like pregnant and nursing mothers, or people living with HIV and AIDS. Refugees are left to make up the shortfall and they are struggling because of the drought.

“We desperately need donors to help support this population with immediate and sustainable assistance. Not doing that will mean they are left behind. It’s heart-breaking.”

At the UN’s Climate Conference, COP27, being held this month, the UN Secretary General is calling for the international community to protect the most vulnerable from the ravages of the climate emergency. Still suffering the aftershocks of brutal conflict and now facing food insecurity, without urgent intervention, Namibia’s refugees are at risk of becoming a forgotten population.

“I’m crying for my children’s future,” says Mbuyi. “I can see my future is darker because of the years that are passing. I lost my whole life. I studied mechanics but I don’t have a job. I’m praying for my kids to not to have a life like mine.”