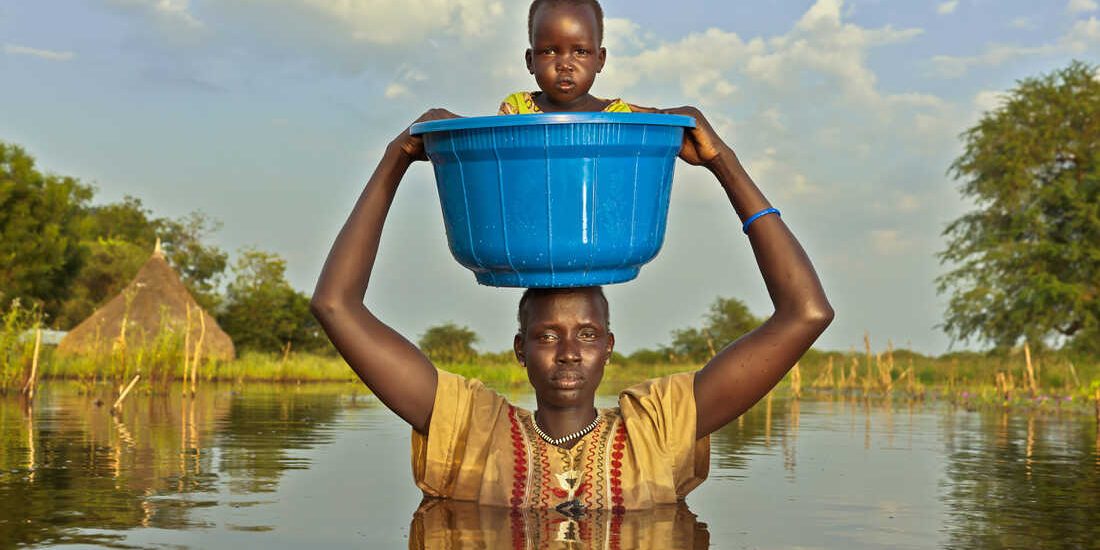 Many parts of South Sudan are submerged under several feet of flood waters as the rain continues to pour, with no signs of subsiding. Since mid-October, one million people across 29 counties have been displaced, as the fourth consecutive year of flooding ravages the country. Some people who fled from their villages due to floods in 2019 are yet to return to their homes which were destroyed.

Over 37,000 tons of crops have been destroyed and 800,000 cattle have been killed by flood waters further pushing 7.74 million to extreme hunger. In Rubkona County of Unity state, current estimates indicate that more than 140,000 people have had to leave their homes due to rising waters. They remain cut off with the only way of reaching them being canoes.

For the world’s youngest nation, this combination of hunger and floods is catastrophic. “Over the last several years, we have witnessed the catastrophic effects of climate change in South Sudan. Increased rainfall has caused flooding, especially for communities in far-flung areas leading to a major humanitarian disaster. Access to hospitals, which was already difficult, has become even harder, as the journey can take close to 12 hours by canoe. We are particularly concerned for pregnant and lactating women and sick community members embarking on the treacherous journey to reach health centers,” said Abel Whande, CARE South Sudan Country Director.

The flooding continues to wreak havoc on the fragile health system of South Sudan. So far 121 health facilities have been destroyed impacting access to medical care for over 300,000 children. At the same time, the stagnant waters have created fertile breeding grounds for disease-spreading vectors leading to an increase in sicknesses such as malaria. With the dilapidated sanitation situation, health conditions such as diarrhea and intestinal worms are rising. In Rubkona, a cholera outbreak has been declared.

Another key medical concern is that immunization coverage for Children under 5 continues to drop due to limited access to supplies and communities being cut off. With the current flooding, pregnant women and children of less than one year have been cut off from antenatal care services and immunization services especially those in the villages/Swamp’s islands.

As a result of missing doses, more and more children will grow up with no doses, which poses a great danger. “Having zero-dose children poses a catastrophic risk in South Sudan and globally as it could lead to a resurgence of diseases that had been eradicated. Before the flood, access to immunizations like measles was difficult due to an inadequate supply of stocks and logistical transport challenges. Now, we are seeing more measles cases in the health facilities we operate in,” said Dr. Emmanuel Ojwang, CARE South Sudan’s, Health and Nutrition Coordinator.

This is not enough, more still needs to be done in the face of dwindling humanitarian support. “The climate change-induced humanitarian crisis that South Sudan faces is huge. The needs supersede the response as the crisis remains underfunded. This year, we have witnessed a lot of funds being cut or redirected and this has led to more people falling into poverty. We need to act now to save the lives of communities that are in dire need before it is too late,” said Abel Whande.