No food, no fuel, no funding: WFP’s northern Ethiopia operations grinding to a halt 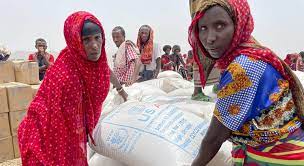 The escalation of conflict across northern Ethiopia means that no WFP convoy has reached Mekelle since mid-December. Stocks of nutritionally fortified food for the treatment of malnourished children and women are now exhausted, and the last of WFP’s cereals, pulses and oil will be distributed next week.

“We’re now having to choose who goes hungry to prevent another from starving,” said Michael Dunford, WFP’s Regional Director for Eastern Africa.

“We need immediate guarantees from all parties to the conflict for safe and secure humanitarian corridors, via all routes, across northern Ethiopia. Humanitarian supplies are simply not flowing at the pace and scale needed. The lack of both food and fuel means we’ve only been able to reach 20% of those we should have in this latest distribution in Tigray. We’re on the edge of a humanitarian disaster.”

More than a year into the conflict in northern Ethiopia, an estimated 9.4 million people require humanitarian food assistance. This is an increase of 2.7 million from just four months ago, the highest number yet. At the same time, because of fighting, food distributions are at an all-time low.

WFP also warns it will likely run out of food and nutrition supplies for millions of people across all of Ethiopia from next month due to an unprecedented lack of funding. WFP is calling for an additional US$337 million to deliver its emergency food assistance response in Northern Ethiopia and US$170 million to reach those affected by severe drought in Somali region over the next six months.